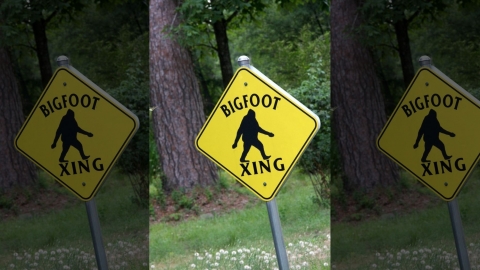 Was it a bear? A guy in a furry suit? Or was it in fact … the elusive BIGFOOT!?

The lumbering legend has once again been filmed, allegedly, and albeit a little out of focus, and from quite a distance — this time in the Great White North, roaming in some thick woods.

The video, uploaded to YouTube, is sparking heated speculation.

“If this not cgi then I would have to say its big foot,” said one convinced commenter.

“[R]edish [sic] brown hair is exactly what color people say they have. I [p]ersonally think its real,” said another true believer.

Skeptics posited the object might be a big bear, perhaps walking on its hind legs.

Despite thousands of claimed sightings and the famous Patterson-Gimlin film footage from the 1960s, an actual Bigfoot or Sasquatch has yet to be captured or found expired in the wild. Many sightings were indeed proven to be hoaxes.

But some remain steadfast in their devotion to the hairy giant.

The family who filmed the latest footage was out for a walk in the wilderness, according to The Sun. Since its posting on Jan. 5, it has been viewed more than 350,000 times.

The mysterious and grainy footage comes just a few short months after several Sasquatches were reportedly sighted in Northern California.

In October, Jeffrey Gonzalez, a self-described paranormal expert, said he heard about the sighting from a local farmer who said he saw the creature and five others running on his ranch near Avocado Lake in East Fresno County.

“One of them, which was extremely tall, had a pig over its shoulder,” Gonzalez said in comments obtained by Fox 26, a Fox News affiliate. “And the five scattered and the one with the pig was running so fast it didn’t see an irrigation pipe and it tripped, with the pig flying over.”

In August, Bigfoot was also reportedly spotted in a North Carolina forest by a self-described Bigfoot watch group.