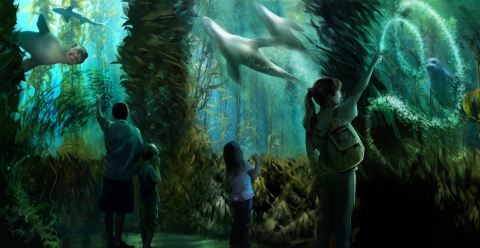 For creatures accustomed to daylight, visiting the fathomless pressroom and reel room of The New York Times was like journeying to a fantastic world far below the streets and sidewalks of Times Square.

At first, you could not even believe it existed — a two-and-half-acre underground factory in the middle of the theater district, from which hundreds of thousands of inky newspapers emerged every day.

The factory closed in 1997. The fantasy will endure.

As I watched, workers contorted lath and slopped plaster to create undulating walls of warts, polyps and protuberances. This, I was told, would soon be a coral reef, glowing with bioluminescence, part of an underwater journey across the Pacific Ocean.

Times Square Attractions Live has leased 60,000 square feet in the basement and subbasement of the former Times headquarters, 229 West 43rd Street, where it plans to open “National Geographic Encounter: Ocean Odyssey” in October. The project will operate under license from National Geographic Partners. The owner of the retail condominium at the base of the building is Kushner Companies.

Ocean Odyssey joins other tenants with conspicuous entrances on the 44th Street side of the building. Bowlmor Times Square’s front door leads to bowling alleys in the former newsroom and composing room. Then comes Guy’s American Kitchen & Bar, which Pete Wells savaged in a review in 2012; a Guitar Center; and another new tenant, Gulliver’s Gate, where cityscapes and landscapes from around the world are rendered in miniature.

Miniature is not the operating philosophy of Ocean Odyssey. The show takes full advantage of the extraordinary height that was needed to accommodate the presses and the newsprint reels directly below that kept them constantly supplied with paper.

What was left behind when this machinery was removed were enormous volumes.

“We often say how grateful we are for your presses,” said Lisa Truitt, a former National Geographic executive. She is now the chief creative officer at SPE Partners, which is a partner in Times Square Attractions Live.

Tickets to Ocean Odyssey begin to go on sale next month, on a reserved and timed basis. Prices will range from the low $30s for children to the low $40s for adults. Visitors will be guided through Ocean Odyssey in groups of 25.

The journey begins in the basement, in shallow seagrasses off the Solomon Islands. The next stop is the coral reef, where visitors can induce computer-generated plankton and jellyfish to move around large screens embedded into the three-dimensional reef.

After the profound darkness of the deep sea, visitors will emerge into the middle of a battle involving Humboldt squids, which plays out on two concave projection screens about 20 feet long. Pressmen, who could do battle themselves, would have known this area as the pressroom office and the middle units of Press P-13 and its folder, a machine in which newspapers were folded and formed as they came off the press.

An actual descent follows, down through a kelp forest and into the subbasement, past the Hawaiian Islands and off to the California coast, where visitors can direct the motion of realistic-looking sea lions.

Finally, visitors ascend a ramp into a two-story-high theater occupying the “Back Room,” where Press P-2 and Press P-36 ran.

(Despite the numbering convention, there were only nine presses in total. Each press was composed of eight units and each unit could produce eight pages, said Nick D’Andrea Jr., the director of production at The Times, which now prints in College Point, Queens.)

The Ocean Odyssey finale, presented on a spherical screen 42 feet in diameter, begins with anchovies feeding on krill. They are joined by thresher sharks, sea lions, marlins, dolphins and common murres. Sensing an impending threat, the anchovies form a great protective bait ball. I could tell you what happens next, but I would be killed.

Before returning to street level — and the inevitable retail experience — visitors pass through a digital center that includes what Ms. Truitt likened to a visual encyclopedia. Here, they can learn more about the creatures they have encountered in the galleries, some of which will be presented as holograms.

For the first time, they can also learn that the oceans are warming, sea levels are rising, waters are polluted, coral reefs are dying and fish stocks are being exhausted by commercial demand. The idea, Ms. Truitt said, was to get visitors emotionally invested before confronting them with stark realities.

“We are trying to entertain with substance,” she said. “What we’re showing is the healthy ocean as it should be — and as it still is in some places.”

Behind the scenes, elements of the pressroom and reel room survive. Most noticeable are the steel floor tiles and the tracks along which rolls of newsprint were once shunted from laydown areas to the reels on which they were mounted.

Let’s now dispense with the obvious clichés: The Times is treading water. Sharks are circling The Times. The Times is out of its depth. That sort of thing.

Besides, as metaphors go, an ocean journey is preferable to the subject of the first exhibition mounted in the old pressroom, in 2009, by Discovery Times Square.

It was the Titanic.