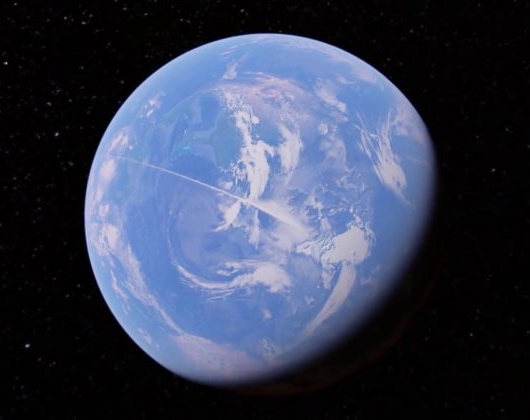 A gigantic line stretching 13,000 miles across the planet has been spotted on Google Earth. The strange line resembles a con-trail emitted by an aeroplane but is much longer, reaching from Antarctica to the North Pole.

The strange line resembles a con-trail emitted by an aeroplane but is much longer, reaching from Antarctica to the North Pole.

It was spotted by the YouTube channel SecureTeam 10.  ‘This was not created by an airliner,’ it said.

‘This map here and at this distance only gives us images of the major cloud formations and weather around the Earth.

‘There are obviously hundreds of thousands of contrails by planes but we cannot see them. ‘Whatever created this cloud formation, if that’s what it is, would have to be massive.

‘Not only that, it would have the ability to go from Antarctica spanning 13,000 miles in a straight line all the way to the North Pole without stopping and without changing direction. ‘It would have to do this fast enough to leave this entire line of clouds in perfect condition like it moved over the Earth in a matter of minutes.’