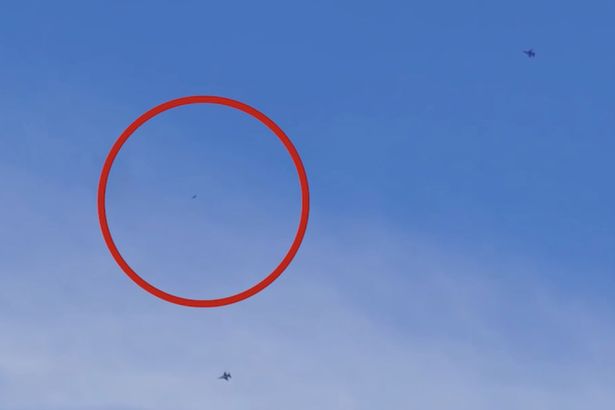 This is the mysterious moment two US air force jets are seen “dogfighting” with an unknown craft in an area where there are believed to be UFOs.

The fighter planes are seen zipping through the sky in an apparent routine training mission over the top secret military base Area 51 in a desert area in Lincoln County, Nevada.

UFO seekers Tim Doyle and Tracey Su camped out some 12 miles away to snap pictures and videos of activity over its skies and didn’t see anything unusual when the military aircraft soared above.

But when they later combed through their photos they spotted the third craft which they described as a “triangular” object which appeared to be battling the US fighter jets.

Their sighting piles more weight on the countless conspiracy theories that the top secret base is a hub of interactions between earthly beings and aliens.

The site is at the centre of the so-called Roswell incident where US scientists are believed to have examined aliens who apparently crash landed their flying disc into a ranch in an area in New Mexico.

Tim and Tracey camped out just outside Area 51 and filmed and snapped the comings and goings and activity in the sky there.

“Welcome to area 51,” said Tim in one of his videos. “We’re in front of the most mysterious and secretive military installation in the entire world.

“We’re just here to look for lights in the sky,” said Tim, “and if they’re here we’re going to find them.”

A narrator on the video, by YouTubeChannel thirdphaseofmoon , says: “These guys are taking a lot of risk bringing this information to you and we’re sharing the evidence.”

The pair filmed hours of footage over several days including the US fighter jets zipping through the sky, but didn’t see it as unusual.

“When we got home and started reviewing the pictures we noticed a third object” in the sky, said Tim.

“What in the world is this? It’s looks like some kind of triangular unmanned drone, because it’s definitely too small to have a person inside of it.

“And after looking at the pictures it definitely looks like the crafts are interacting with each other. It’s like a three-plane dogfight.”

Tim and Tracey’s remarkable footage on YouTube has already been seized upon by conspiracy theorists that it is proof there is UFO activity in Area 51.

Chuku Marrero posted: “I know they are real they are with us … Nevada is the centre.”

Lori Roberson1 wrote: “Ufo’s been round for so many years.”

The US government has never revealed the purpose of the site in a remote area in the desert in Nevada.

The CIA only admitted for the first time in 2005 that the military base, which is north-west of Las Vegas, even existed.